February 09, 2020
It has been two years since people here had stepped on the snow for the last time, It was one of the rarest moments since it does not snow much in this region. Last week, it was time to get out of under this dry, grey and unstable sky. Fortunately, San Isidro has become the destination.

After almost four hours of travel, I was walking on the snow which seemed iced due to cold nights and days without snow. Next day was the day to get started with skiing. I have never tried it before except sliding on the plastic bags and small chairs when we were children. I used the slide down on all the small hills there were around my neighbourhood for long hours. I have so many memories from childhood and many of them are when it was winter. Later we went to rent the equipment, there are several local shop you can rent the equipment. I had no idea that each of them is very important on their own, learned that after two days. I decided to go with snowboarding, always interested in both skateboarding and snowboarding. Then it was time to go up to the facilities with what we have. 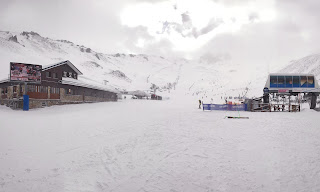 Let's share some information about San Isidro and the resort before going on with the details of beginner's guide to ski and snowboard. First of all, the region is so beautiful with all the mountains and views, it belongs to the national park called "Picos de Europa" (meaning peaks of Europe). It is on the mountain range of Cantábrica, north of León city. In two days, I could not see so much but from what I see, the region is so nice. It is now my next destination.[3][4]

The ski resort has opened in 1974 and it has 27.5 kilometres of ski slopes. There are pistes for all level, from beginners to experts. [2] I did not know the meaning of the colours, learnt that green is for beginners[5] You but forfait (ski pass) for 16€ and it is valid for a whole day.[1] You can use the chairlifts, ski-lift and conveyor belts. If you are a beginner, you only use the conveyor belts but I have used the ski lift just to see the view on the top of the mountain and got back down on it just before the resort was closed due to incoming blizzard, the first time in my life seeing such a storm.

The first day, even though I had watched several youtube videos and felt confident, I took a private class from a trainer. As someone with intense sports history, I knew that every sport seems easy when watching, but in fact, all require work. After one hour and tens of falls, I was able to snowboard without falling. It should be noted that you do not enjoy it at all, the first day is such a nightmare that you only feel the pain in the hip and the tension on the legs, nothing enjoyable. All night, the resort was expected to be off due to the blizzard but in the morning through noon, they have opened it. Speaking of which, before going to the resort, do not forget the check the status of it, it might be off. [1] Though the end of the second day, I was finally enjoying it. That does not mean I was snowboarding on the pistes of other colours than the green one, but I was able to get down to the start line without falling down or any stops. 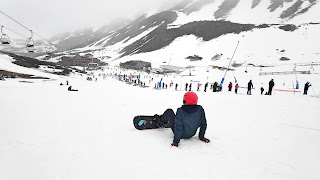 I have learned my lessons from these two days. Firstly, know well how to put on the shoes and tie them well. I do not know for skiing but for snowboarding, the tightness of the shoes is very important. Secondly, the videos and trainers show you the basics but in my opinion, the most basic is to know how to fall, both for when you fall down back or front. There are good videos on how to fall down, watch them[6]. Knowing that increases you confidence and decreased the pain you would have after.

It might sound funny but it is cold out there, even though it is sunny and seems hot. Take you your gloves serious, the fingertips are very sensitive, considering you would spend a whole day out in the snow. Do not put on non-waterproof pants, you will get wet after falling several times, even though you do not fall, in order to put on your shore, you need to sit on your hips (only for snowboarding) every time. Obviously, two days are not enough to learn all and start speeding. I think it at least requires five days to start to speed and enjoy it. That's all I could share from two days of  "professional snowboarding".

San Isidro resort seems a good place for both beginners and experts. I wish I had been able to get back snowboarding when I took the lift to the top of the hill, it was lovely seeing all the view in that blizzard. The region is so beautiful.  On the way to San Isidro, you can enjoy the view of the dam of Porma (Embalse de Porma) on the river of Porma.  I am planning to go back and visit to the region several times in the future to discover it more.