May 02, 2020
We were outside of coverage area during hiking on Sierra de Gredos. After a few seconds from we had started to get down from the peak, we had network connection and at that moment my friend Eric, nervously, told me that a lockdown has started due to the pandemic. It was time to get back home as soon as possible. The visit to Sierra de Gredos was the last day we were able to freely walk around. Since then we are in lockdown. 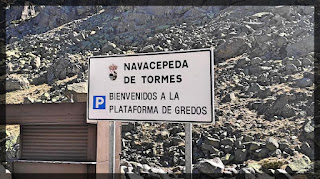 In this post, I was planning to share both how hiking in Sierra de Gredos was like and my experiences of being in lockdown during this pandemic. But it has been 48 days already in lockdown and there are so many things to talk/write about, so I will leave it for another post.

Let´s start with Sierra de Gredos. I have been there twice, I had not been on the lake the first time.

This time, we have walked until the lake, which was half icy. It took an hour and a half to get there from Salamanca, the views along roads are nice. You can get to the start point by car, after parking you hit the path which takes you to the top and to the lake. 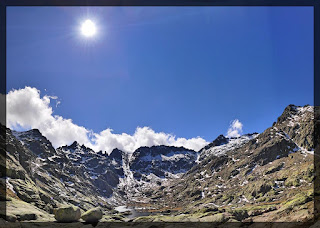 Once you are on the top of the hill, you can see the whole mountain range that Sierra de Gredos belongs to. If you look down to your left, you can see the lake, which looks so small, even makes you think whether it worths to get there. But it won't take long to notice that it is an illusion, it is a big lake in fact. In my opinion, the mountain range standing in front of you like a wallpaper, breaking your perception of distance and this causes an illusion that makes you think the lake is smaller than it is.


By the path you walk along, various foundations will welcome you. They serve the water of the melting snow, flowing from the top of the mountains. That's why it is so cold and if you are familiar with the taste of the snow, maybe due to trying it many times when you were a child, you will notice the taste.
Once we got to the lake, we took a break to snack and rest in front of huge mountains, on the beach of 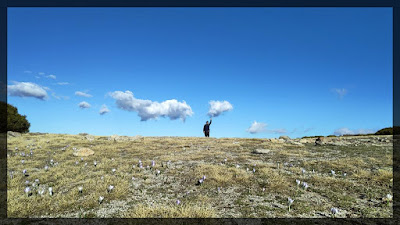 the lake. There is a shelter ahead. It is called refugio (shelter) and makes you think it is a cottage, but when we got there, we noticed that it was a big building which makes you wonder how they had built and how do they transport food to serve. A friend once told that they do transportation with horses.

Getting back down to the car was harder than it seems but it was worthy, especially being able to see a group of the Spanish ibex  (Capra pyrenaica) after talking about it the whole day, asking ourselves whether we were going to see them, just as we reached to the car, we met them.

As it can be seen on the image taken from Google fit, we have walked more or less 14 km, after the whole day, it does now seem that much.

The lockdown has started that day. The moment we received the news, we went to the supermarket in the nearest town on the way, Barco de Avila. That same day, I was going to see a car to but as well, we were planning to travel more often and we had decided to buy a car to do so. But yes, what you know!
It has been 48 days since the lockdown has started. Starting from today, people can go out to do exercise. We could go to supermarkets, hospitals, farmacy etc. but starting from today, we are able to go out just to do exercise. Let's leave it here and I will write all those 48 days in another post and for now, let's dream about travelling and being able to go hiking in Sierra de Gredos!