Aveiro, Portugal on a weekend

July 19, 2020
Aveiro is the closest coastal city to Salamanca, that's why during whole quarantine time, we have been planning to visit it. Nilu is leaving for her hometown for five weeks, so before her leave, we decided to go to Aveiro last weekend to enjoy the city and the beautiful beaches it has. 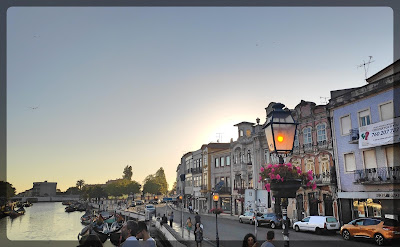 In this post, I will try to share what we were able to see and experience on a weekend, so don't expect detailed guide of Aveiro but if you plan to travel for a weekend, what I will share might be helpful.
The travel took around 4 hours. We headed to Costa Nova just after arriving in the city. Costa Nova [1] is the name of the beach which is situated on the Aveiro Lagoon [4]. Until now, I did not what lagoon means, and according to Wikipedia, it means "a shallow body of water separated from a larger body of water by...", which makes sense because ocean water reaches to the city centre by this lagoon, similar to a river. In Spanish, "rio" means river, and apparently, Aveiro Lagoon is translated as Ría de Aveiro [2], so we can conclude lagoon is Ría in Spanish. But If we translate lagoon to Spanish, the result is "lake". The word "Ria" exists in English as well. In Turkish, it is 'kıyı gölü' meaning 'lake of the coast' or 'deniz kulağı' meaning 'ear of the sea'. I liked the 'ear of the sea', it kinds of makes me visualize it better.
Aveiro Lagoon is around 45 km long [3]. According to the guide of moliceiros (I will explain about that), the level of water in this lagoon is kept in balance with some doors, they are closed/opened two times a day to level the water with ocean. 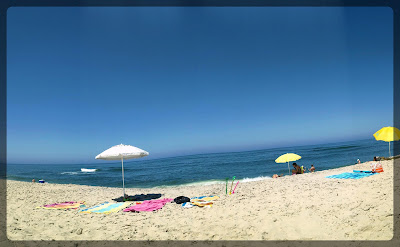 Costa Nova is a beautiful beach with very clean and wide sand along to the ocean, it is huge. Since it is nearby an ocean, the water is wavy but it does not withhold you from having fun, and I think it is even more fun than still water. It is very well protected, there are no buildings, no constructions, it is almost wild. Take your beach umbrella with you, fortunately, we did it. Since it is so big, I did not see any issues about security distance to be safe from the pandemic.  You can easily find a point to stick up your umbrella which has enough distance from others.[1] Similar to Costa Nova beach, there is another one called Barra Beach, it is also lovely and it has a 19th-century lighthouse. We went to this one on Sunday.
After spending the rest of the first day in the Costa Nova beach, we head back to the city centre for the night. You can find nice cafes and restaurants to try some vino verde and vino de casa (homemade wine) near the water of the lagoon, so nice.
In the evening, we wanted to take the moliceiros tour. But it was late for that, we learnt that the moliceiros operate until 19:00, so we left it for the next day. In the morning, after having breakfast in one of the lovely cafes, we headed for the tour. 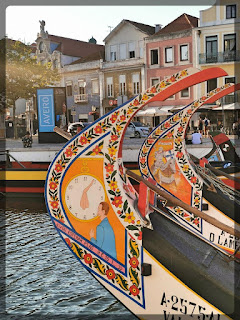 Moliceiros are small boats which were used in seaweed harvesting. Now they offer tours to travellers to show the city. They are colourful and they have nice drawings on them., many of them have paintings of erotic nature. A single tour costs 13 euros and it lasts 45 mins. A local guide accompanies you and tells the stories and histories of the places you pass by with the boat.
After the boat tour, we went to the second beach which is called Praia da Barra,  Barra Beach. This beach is on the same cost with Costa Nova, the only difference is that you find a lighthouse on this one. [6] We spent the rest of the day on Barra Beach. It was wavier than the day before but it is amazing to see such a big and wide beach with clean and lovely sand.
At the end of the day, we hit the road to get back home. On a Sunday evening, many people returning from the beach, there might be some traffic jam.
Despite the fact that Portugal and Spain are neighbour countries, you see lots of cultural differences. Especially Salamanca is so close, which is one hour far to the Portugal border and I know lots of people who have never seen Portugal. I will write another post to share my opinions on these differences. The first thing you notice is that you do not need to wear a mask on the streets, it is obligated only in closed spaces. This is not possible in Spain. It is kind of weird seeing that, it is the same virus and same geography. Anyways, that is interesting.
Conclusion, we loved Aveiro. Even living here in the future has crossed in my mind. The city is beautiful, people are very friendly. Even though the city we live in is a touristic city, you do not see that friendly and courteous behaviour from, for example, waiters. It is not that because they are less educated, just cultural. I am sharing a to-do list for a weekend and photo of a curious local man reading the news of the day.
Last but not least, the beaches are far from the city centre, you can not walk. I do not know if there is transportation from the city centre to the beach. If you plan to come without a car, consider this. Using public transportation, environment and having your own car, the relationship among these three seems so stupid to me in around here. Let's leave it for another blog post.
Saturday
1. Costa Nova beach
2. Evening: walk around and dinner in the city
Sunday
1. Breakfast
2. Moliceiro Tours in the Aveiro Lagoon
3. Praia da Barra,  Barra Beach (Take your lunch with you)
4. Go home! 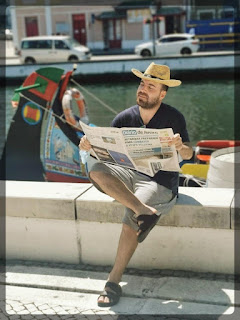